I first discovered there were carp in my local park lake when I was walking my dog and I stumbled across shadows lurking beneath the surface. The sun was beaming down and it was March, I sat there watching these fish, two commons and a mirror, slowly going about their business whilst waking up for the spring ahead. These fish were much larger than I would have ever imagined the lake to hold, as it’s only 2.5 maybe 3 feet deep across 90% of the lake. After witnessing this, I was itching to get the rods out, so I could discover what else the lake could be hiding.

I arrived for my first session on a Saturday morning, and instantly I could see the carp were taking the same patrol routes as I’d seen previously. I decided to set up on the north bank of the lake as I could see the majority of the lake from here. The fish I’d seen would then be to my right hand side, and I could bring them back away from the shopping trolley ridden bank, should I hook one. The lake was surprisingly weedy for the time of year, and with the lake being incredibly shallow, and the water crystal clear, I could see there was no way I would be able to present a bottom bait in that area. So I opted to fish the chod rig, and just try and place them on the patrol routes of the fish.

A few hours passed, and whack! The bobbin on the right hand rod smashed up to the top, a huge eruption out in the lake where the hookbait had been positioned and I was in! After a nervy battle, and a surprisingly hard fighting fish for its size, I slipped the net under a ghosty common of about 16lb! Not the biggest of fish but I was made up, especially as a few days ago I didn’t have a clue if there was any carp in there! My mate who had just wandered down, and myself were both ecstatic and intrigued as to what else was residing within the lake.

After that day, I formulated a plan, and decided to go about pre baiting the lake. Over the next three weeks, I put in 15 kilo of boilie, all round one end of the lake, just to get the fish eating the bait. My plan was to fish the Friday (3 weeks on from the previous session) and to my disappointment, I had an exam at college brought forward, which meant I couldn’t go! As I was so impatient to know as to whether the baiting had worked or not, I asked my mate go down and fish the area, and see what happens. Well… I regretted that choice! He bagged up! With my phone buzzing like hell at college, it turned out that within an hour of him casting out, he’d had three fish. He couldn’t have any rods in the water as his net and slings were all full! He managed a 23.8 ghosty, a 21 mirror, and a 19.8 zip linear. I was made up for him, and as soon as I’d finished at college I rushed down and did him some pictures. At this point we were really excited for what lay ahead and so decided to fish the lake for the remainder of that year.

That summer me and a couple of other mates fished the lake regularly, every week/couple of weeks, catching fish of around upper double regularly, always finding the fish easily with it not being the biggest and deepest of lakes. But we soon found ourselves having recaptures, and these started to become quite regular. For some reason the fish in this lake absolutely loved a yellow pineapple pop up, they just wouldn’t stop taking it. On one session, a mate and myself were watching a group of five carp coming into a corner, and decided to place chod rigs where we could see the hookbait. Within half an hour we’d caught three out of the five carp and we’d seen them taking the chods! It was an awesome way of fishing, and mega exciting, The fish often came into this corner when it was baking hot, and we soon knew all their patrol routes to the point where we would know where the fish were before we’d even got to the lake.

After the summer had passed and the autumn had arrived, the fish started to wise up a bit. Our bites had slowed up slightly, and we’d not managed to catch anymore over the 20lb mark since the ghosty and the mirror. This came as a surprise to us, as the fish id seen originally when walking the dog looked every inch 20lb and the rest!

By the time we’d caught a few, winter had well and truly started to settle in, and we continued to fish bright hookbaits due to the cold water temperatures and the fish’s eyesight deteriorating. To our surprise that winter, we struggled an awful lot, with one of the lads doing 12 sessions in a row without a bite. We had to come up with a plan of how to catch these fish on other methods than just pop ups.

March soon came around again, and we decided with the lake only being shallow, we would have a wade in and see what we could find, and well, the results were amazing. We managed to find a completely clean area of clay that was incredibly hard, and probably about the size of a mini! Now this spot must have been covered by floating weed throughout the previous year, because we’d never seen it before and now you could see it like a shiny new penny from anywhere on the lake.

From that point on we decided to bait this spot with plenty of boilie, and on this type of bottom we could fish near enough any type of presentation we wanted. With this, the bites started to pick up again and really started to kick off. We started to catch a few more new fish. But to our surprise, by this point, we’d never actually caught any fish in night time hours, or in the evening, and this really puzzled us. We would get bites from say 5am, up until about 2/3 in the afternoon and then the lake seemed to go dead. That was until one night in the summer, we stayed up well into the early hours of the morning, and discovered they were margin crawlers! The lake gets a lot of attention from dog walkers and people coming down to feed the ducks with it being a public park, and so all the fish we’d seen, were generally over 20/30 yards out. With this in mind we knew the fish wouldn’t come in the margins so much in the day, and so they were drifting up and down them at night, picking up all the loose bread that the ducks hadn’t managed to get, and all the naturals that dogs etc had kicked up from the silt. With this discovery, we started to fish the edges at night right on the cobbles, that the lakes perimeter was made up of, and the bites again started to pick up. But we still only ended up catching many of the same fish, although there were a few fish that we’d seen cruising about but hadn’t yet managed to catch.

Winter soon started to settle in again, and rather than put ourselves through some tough days on the park we decided to fish easier venues throughout that time of year, thinking we’d be back again in the spring for another crack. That was until we got a huge surprise in February. A young lad had gone fishing on the park, and had a big common. He claimed it was around 28lb although he didn’t weigh it. Now we’d never seen anything of this size in the park in all the time we’d been fishing there, and we doubted this until we were shown the pictures, and to say we were surprised was an understatement. It’s belly was huge and it looked every bit of 28lb so fair play to that lad! AND it was caught on a chod! This reignited a fire for us all and we all wanted to get back on the park, and so with all this running through our minds, we headed back down there in search of this big common.

We went back down fishing the park in the same manner, just thinking eventually, if we keep catching regularly, this common has to slip up eventually. A couple of months passed and we’d been catching regularly, but that big common still hadn’t slipped up, we hadn’t even seen it! Then one afternoon in may I thought to myself ‘right I’m going to go down and catch it and have it done with’. I was determined to catch this fish. I set up on the north bank, and nothing occurred that night, and so in the morning at about 10am, I decided to move. I don’t know why and I don’t know what I was thinking, but I decided to wade out, and place a chod right under a tree on the island, and I mean right under. I’d just got back onto the bank after placing the rig, and whack! It was away! A couple of young lads who were also fishing (they had been present when the other lad had caught the big common) just said to me ‘you’ve got it on, look its massive!’ and low and behold I had it in the net not long after. Not a monumental scrap, the complete opposite if I’m honest, but I didn’t care, I was made up. It went 30lb 8oz on the scales, and was a real character. Black as you like and the fact it was an unknown common made it all the sweeter! It was just meant to be.

I’ve only been back down to the park once since this session, for a short filming trip. There’s still a few fish I would like to catch and tick off the list, so hopefully ill be back down there soon doing it! Remember, don’t underestimate the local park lakes this country holds, and the best part is many of them are free fishing!

Big Thanks to Andrew Hart for writing this article 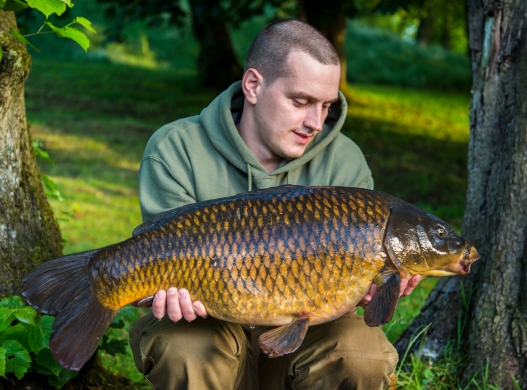 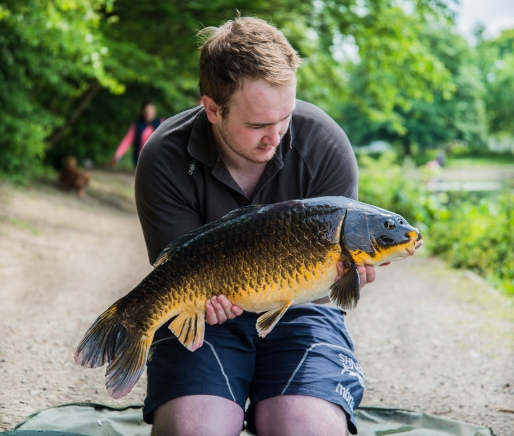