A Session to Remember By Robert Hall

As anglers we all dream of that magic session where everything goes right , we lay awake on a night time unable to sleep because we are too excited about getting some well needed bank time ,running through all the different scenarios in our head about what can and will hopefully happen, unfortunately most the time it doesn’t quite pan out like we dreamed it would ,but for me back in august 2015 I had my most memorable session to date and although it wasn’t a session jam packed with fish it was one ill remember for a long time.

Going back a few years when I first started carp fishing

I managed to get on a syndicate quite close to home it was a 3 acre lake situated in kidderminster and from what I had been told it was home to some big residents many being mid to high 20’s and to me at the time that was a huge fish and something I had been dreaming about catching, a carp over the 20lb mark that is an achievement which still eludes many anglers, at the time carp fishing was all very new to me , I spent countless hours watching thinking tackle and various other free dvd’s from local tackle shops , I would sit and watch them tie rigs over and over and take in any information that would help improve my sessions. After a good few blanks I finally started getting into some fish slowly working my way through the weights catching fish from 19lbs all the way up to what was my pb for nearly five years and also one of the biggest fish in the lake a 29lb common , I also caught this fish again a week later weighing a whole one ounce bigger and to be honest I was really happy to see the fish again because my mate had made a right cock up of the previous photos . 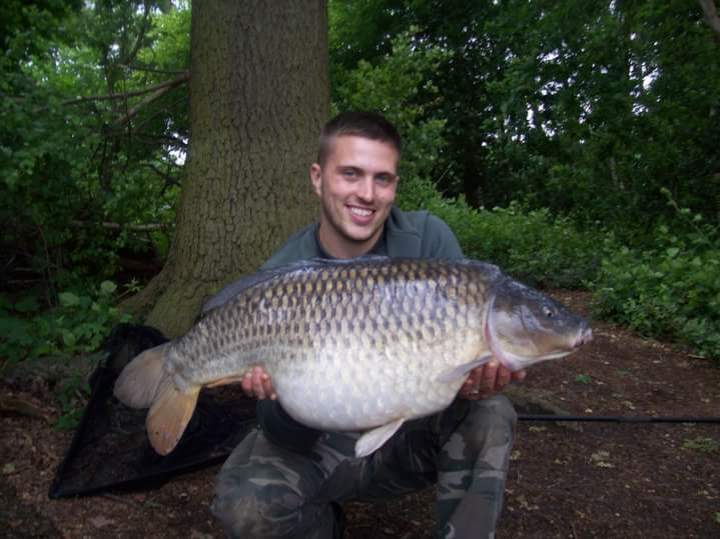 After almost 3 years being in this syndicate and catching the same fish time and time again it was time to move on,

A further two years went by and in those two years all i seemed to do was work just pinching the odd day to do a session , none of the waters I fished held anything substantial and the only way I was going to beat my pb was to go a bit further afield.

After meeting up with an old school friend Adam who I hadn’t seen for many years , we got chatting about fishing we started discussing linear fisheries down in Oxford a place id seen so many times in those free dvds id picked up and a place id dreamed of fishing ,after some debating we decided to book some time off work and go down for a 48 hour session.

To say I was excited would be an understatement ,This was it the chance to finally break my pb after all these years.

As we arrived at the complex we already knew which lake we were going to be fishing, Oxlesase lake a 26 acre pit holding at least 60 30lb plus fish and is know renowned for its lake record common which weighs a whopping 52lbs.

On arrival we noticed that only half the lake was occupied mostly the swims you can park right behind ,now obviously nobody likes lumping their gear half way around the lake but it seemed we had little choice. Before I get my gear out I always have a good walk around ,For me the best weapon in your fishing arsenal is your eyes and it soon became apparent where the fish were, all those lines in the water and a warm wind had pushed the fish towards the top end of the lake ,I couldn’t believe that half of the lake was completely empty not an angler in sight I couldn’t understand why nobody had spotted the amount of fish moving and capitalised on it, don’t get me wrong though me and Adam were extremely pleased by this and we hastily went back to fetch the gear..

My set up was simple, fluorocarbon mainline fished straight the way through no fancy leadcore no leaders just flouro , I wanted everything to be as invisible as possible ,using some korda tungsten beads strategically spaced up the line to make sure everything was pinned down and a helicopter set up so I could fish at range. At The business end I had decided to use a stiff hinge set up, mainly because of the weed growth that was present ,id used half a cell and half a salty squid pop up from mainline baits chopped down so it was critically balanced and allowed the bait to sink ever so slowly so if it landed amongst the weed I knew it would be presented right and not buried out of sight, I didn’t use any pva bags as this would have only hindered my casting range just a number of free offerings scattered with around with my boilie stick.

So the rods were finally out the traps were set ,it was time to kick back and enjoy a well earned cup of Tea or Tay as us dudley folk say. But the rods weren’t out for long and it was Adam that struck first , He did get a lucky break here though and so did the carp because the line and unsafe rig it was trailing had got wrapped up around Adams line, the fish weighed in at 20lb 4 oz not a bad start by anyone’s standards even if he was lucky. the poor fish must have been trailing this rig for some time as his mouth had a nasty gash which we patched up with our care kit before sending him on his way to fight another day.

A few hours went by we sat anxiously watching and waiting for that next bite ,as the sun set and night dawned ever closer we decided to bait up recast and call it a night, clambering into my bivvy and disposing of all the spiders with my throwing stick I lay there in hope That tonight was going to be my night.

Id been in bed for what seemed an eternity in fact it was only an hour before it all kicked off , my left hand rod which was as tight to the island as I could get it had sprung into action, I knew this was a decent fish as soon as i picked up my rod ,that trademark glide and that wallowing from left to right after a dogged fight and nearly losing it in the thick bed of weed in front of me Adam had managed to slide the net under the fish, i remember him saying “that’s a donkey our kid . and he wasn’t wrong my first ever oxlease mirror carp and a new pb 32lbs on the button, id done it finally , like a kid at Christmas with a smile that could light up the night I was in disbelief my first 30+ fish and a new pb to boot, 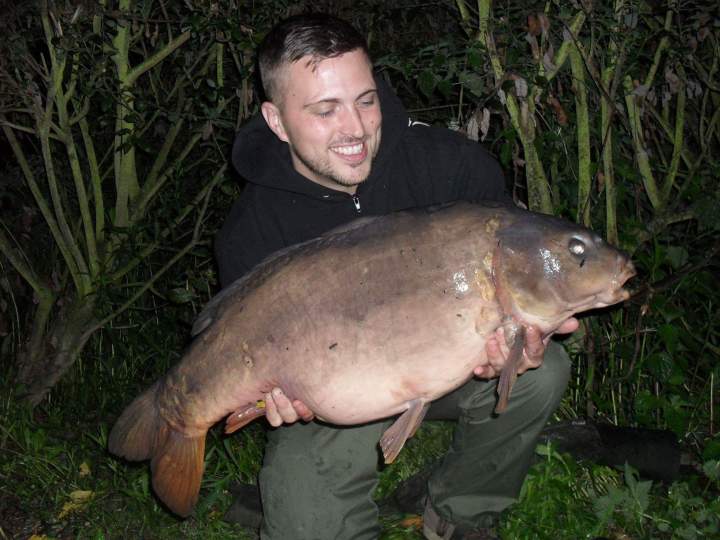 I didn’t think the session could get much better but after taking the snaps and getting back into bed only four hours passed before i was in yet again, the same rod went roaring off, running out in a blind panic in just my socks i struck into what felt like another donkey, and my thoughts were confirmed when Adam slid the net under my second fish of the session, with the fish being weighed I stood in disbelief once again id only gone and done it for a second time after years of waiting id beat my pb twice in the first 24 hours of being at linear .

My second fish weighed in at 34lbs 4oz in the shape of a big chunky mirror carp , my mission was already complete with 24 hours left to spare ,id done what I set out to do not once but twice. Not much happened the second day with the arrival of more anglers possibly making the fish more wary with the extra pressure, I decided to try a bit of stalking i wanted more fish and with little showing in front of us I decided to go in search of the fish armed with a few chopped up boilies and my rod,I found a nice quiet corner with a sunken tree and id spotted 3-4 fish moving in and out of the area, as soon as the fish moved out I threw in a handful of chops and waited for their return , I sat and watched them come back in and confidently pick up the free offerings, I patiently waited for them to leave once again before lowering my rig into place using chops fished back to back almost like an apple core trying to match the free offerings as much as possible, and it didn’t take long for one of the fish to reappear as soon as I saw his head go down and his tail go up I knew that fish was mine. 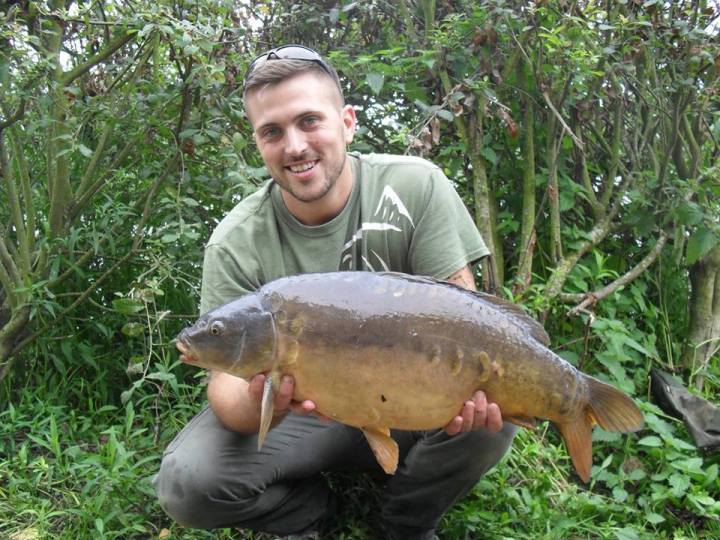 Weighing in at 15lbs not a monster but a fish id worked for and watching it come in and take my bait was really exciting stuff.

As the heat rose so did the fish ,after a pretty slow second day and night it was finally time to start packing away but with so many fish now showing in front of us on top I couldn’t resist getting ziggy with it, a method id been reluctant to use in other sessions i personally didn’t have much confidence in the method, but seeing as id done what i came to do I thought what have I really got to lose added in with the fact I hadn’t brought any surface fishing gear with me I thought id give it a try.

And would u believe it id just finished packing my bivvy away and my zig rigged chopped down cell boilie had done the business , landing me the final fish of the session and my first ever fish on a zig.

24lbs and what a way to end the session, linear truly is an amazing place and I can’t wait to get back there this year .unfortunately Adam wasn’t able to get stuck into any more fish but I’m sure his time will come soon enough, for me it was a session to remember and one I won’t forget. 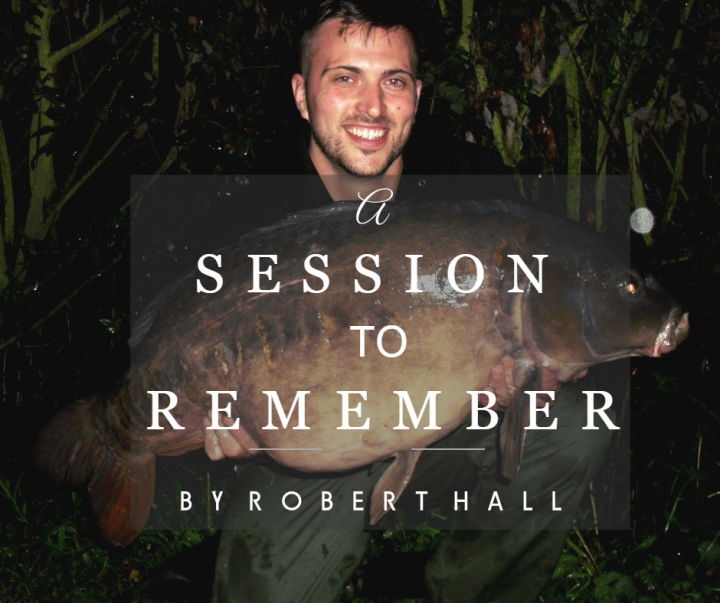