The following year I moved onto Linch Hill. Linch provided me with some of the most frustrating times of my carp fishing career. There was an amazing head of big carp in the three lakes on the complex especially Christchurch. Unfortunately even though you could get a season ticket, day tickets were still allowed at that time on Christchurch and Stoneacres and Christchurch suffered as a result. I knew after just a couple of sessions that this place wasn’t going to be for me, but as it was only five minutes from my front door I stuck at it. In the spring, many times I would push my barrow down to Christchurch only to have to turn back again as it was completely full up! What a nightmare and what a difference after Yateley and Elstow 2. The fishing on Linch was not what I would call rock hard but it was amazingly tricky. The fish liked their small baits and fake corn was definitely the way to catch them on there. Also this was where I saw the zig rig for the first time. Anglers were catching on tiny pieces of rig foam between 10 and 13 feet off the bottom! Also they were catching them in the middle of the night like this! I couldn’t get my head around this and still can’t today but I did catch like this myself! I did meet some incredibly gifted young anglers on here, one in particular, Danny Aplin. These guys were light years ahead of me with regards this type of fishing and with the big head of fish in there really put it to good use with big hits of big carp. I caught a few and had a dabble on Stoneacres and had a few nice ones out of there but really Linch just wasn’t for me. 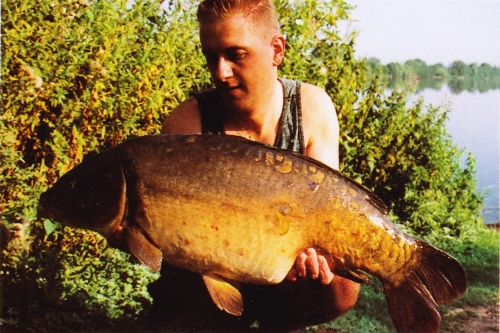 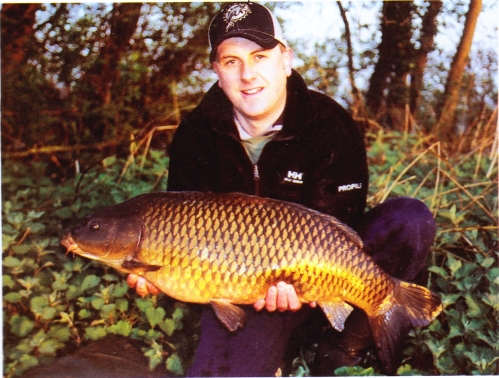 If you remember earlier I mentioned that I had got permission to fish a day’s only water on a trout fishing complex. Because Linch was so busy I found myself giving this water some attention now and even started a baiting campaign that lasted several months. Trouble was when I started fishing it I started to catch Tench over my baited spots and not just one or two! The great thing about this water was that hardly anyone else fished it and I NEVER saw another carp angler fish it. During that summer of 2003 I did a lot of walking around looking for carp especially on the red hot days and I came to the conclusion that there were between six to ten carp in there and probably the lower figure. I did set eyes on a very large fish which was a sandy colour and one afternoon I found her right in the edge having a grub about. It’s hard to put a weight on fish like this but she looked every inch as big as “Cuttail” which I used to watch in the water back on Manor. I got a rod and tried to have a stalk but she was so close I had to wait for her to move away and she didn’t come back. It was during a session like this that I did finally catch one from here. Again I found some fish close in on a warm day with a gentle breeze pushing in (this was the best conditions I came to believe on here to find the fish). There were two or three of them mooching around in the margins and when they moved out I took a chance and lowered a bait in close to where they had been. I stood behind a bush and watched. All of a sudden there was an almighty boil just where my bait was and the rod layed on the floor jerked forward and then stopped. I thought I had pricked the fish and it had gone but the rod suddenly started moving again towards the lake! I just managed to grab it and realised what had happened. The fish had gone off so quickly it had pulled line off the reel at such a rate of knots that it had spilled out quicker than the loose clutch would allow. Now it had tangled behind the spool but in one of those miraculous I just sort of flicked at it and it came loose. After a frantic battle which saw the fish try and leap out (probably never been hooked before) I netted a perfect old warrior which weighed 28lb 4oz.

The Ski Lake opened on April 1st which fell on one of my midweek nights so the early spring was spent doing a few nights and days on there. The Ski Lake didn’t have any massive carp in it apart from one notable exception, but it still had some an original leneys’ in. Just a couple of hours into the new season I had one which I think was a leney. It was only a mid double but it was a common with no pelvics, just like the one in Redmire! I had a couple of others that spring, the biggest just under 24lb. 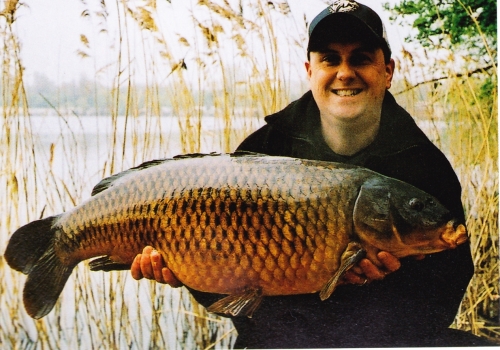 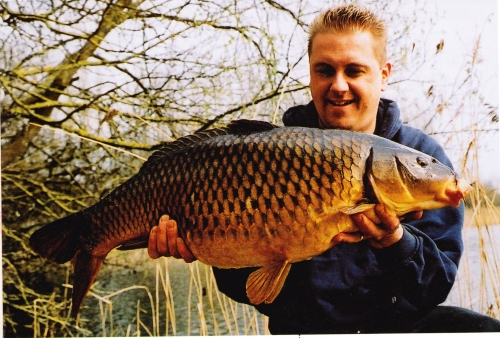 When the season opened on the no publicity lake I a few sessions over there until my baby came along. I managed to winkle one out, a 31 pounder. I did a few sessions on Stoneacres but didn’t catch anything and hardly fished the lake on the trout complex at all. My little girl, Amy was born on July 26th so I pretty much didn’t fish again in 2005 as being a father is a great job and fishing was put on the back burner for a while. Being a cricket fan that summer was pretty amazing with the ashes as well so what a year for me! By 2006 my family life had got into a routine and my wife was back at work after maternity. My fishing was (is) now limited to an overnighter once a fortnight. When I get my weekend off every other week that is obviously spent with the family and my day off in the week is now spent looking after my daughter. I do fish the night before this day off though. As you can imagine trying to fish the kind of lakes that I like to target and being successful with the time I had was always going to be very difficult. I couldn’t make up my mind whether to drop the Stoneacres ticket for 2006 as I just didn’t think I would be able to do it justice. The ever growing stock of biggies in there was making it a very difficult decision though. The biggest fish in there was approaching 50lb and there were at least two others around mid forties and a few others over 40lb as well! It is five minutes from my front door and the temptation was just too much so I rejoined. I still had my syndicate ticket for the no publicity lake as well. The lake on the trout fishing complex had suffered from some serious flooding and talking to the owner I discovered a couple of carp had been found dead since I had last fished it. It was a shame as I would have loved to have caught that big sandy coloured carp but who knows, she may still be in there. Trouble was the owner told me that a large carp had been seen in one of the trout lakes and these lakes were all one after the flooding (and this was before the even worse floods in the summer of 2007). The other problem with this lake now was that crayfish had got in during the first floods so there were less carp (possibly only one or two now!) loads of crayfish and I could only fish nights and this was a day only lake! I think you can see that this water is now on the back burner for me but not forgotten about. With my time restrictions and the two difficult waters I was fishing my worse fears were confirmed as for the first time in my carp fishing career I had a season blank on my main target waters. It was obvious I was going to have to have a re-think on my venues in the future. I needed a fairly local venue to give me half a chance of getting to after work in time to have a look around before commencing fishing. It also had to have what I class as proper stock. Now we are all different and if someone is happy to fish for pellet fed fast growing stockies then that’s great but it’s not for me. I’m not saying my way is best but it’s what I like. I do get angry as I touched on earlier though when heritage waters are stuffed full with these fish though. The Linear site late in 2006 still had a few waters that interested me with the type of carp I was after but unfortunately it also had a couple of waters that just weren’t for me. Oxlease (which was closed at that time) and Brasenose 1 were definitely not for me but if you like a bend in the rod these were definitely the lakes to get on. Manor where I used to love to fish had lost quite a few of its history fish and I’m afraid this has been “Stockied” as I call it. St Johns has the right stock but I’m afraid is just too busy for me to consider it. This left Hardwick/Smiths which has some absolute stunners and has the right mix of not too many fish in there making it quite a tricky water keeping the numbers of anglers down as well. Like all the linear waters I believe it is pretty heavily fished at weekends but not over the top in the week when I would be doing my night. I had a word with Roy and he conformed that although it could get busy he didn’t think I would have too many problems mid week. My plans for 2007 were beginning to take shape. Spring and autumn on Hardwick/Smiths and the summer on the no publicity lake. This would mean finally giving up my Stoneacres ticket but in the interests of my fishing I thought this would be for the best. Before that though I had the winter of 2006/2007. Linear being quite a forward thinking company also had another water on site that they had purposely stocked with pretty carp and not just fast growing pellet munchers. This water was Brasenose 2 and had far more to offer me than its sister lake next door. I had a few half day sessions on a Saturday or Sunday morning during that winter and caught a few nice ones. Hardwick/Smiths doesn’t have the numbers of big carp like St Johns has which is probably another reason it doesn’t suffer the angling pressure problems that St Johns suffers from. Spring 2007 I had a few nights on Hardwick/Smiths and caught some nice ones up to upper twenties which was a beautiful dark near linear that looked like a woodcarving. 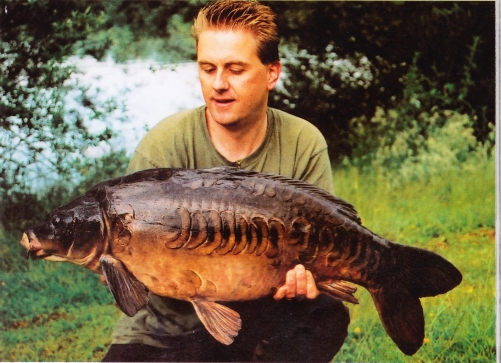