Weedy and overgrown, the unknown of the seemingly unobtainable water tucked away in sleepy North Cambridgeshire. I had known about this old lake for a long time, occasionally glancing across it whilst visiting friends on a neighbouring syndicate, but with a closed shop of just 6 members, the 12-acre wild and natural water was out of reach to the unprivileged masses.

The spring of 2008 saw my preparations for another season on a large, local syndicate. It was then I happened to meet “Jim” a local to the area and friend to the lake owner. We discussed the weather, the shooting season, his spaniels and eventually the “old lake” I was surprised to hear that it had a different owner to the rest in the area, Jim kindly offered to put my name forward to the owner for a ticket.

A few weeks past and I then took the call, and the ticket was mine! At this time there were 5 members including myself. The lake was heavily tree lined, with two parts connected by a very narrow and snaggy channel, there was even a boat for the use of anglers and that was my first mission, find the fish! Floating amongst the weed it was obvious the bream were King of this water (this was quickly confirmed with average sizes of 14lb), but the unmistakable dark shadows of Carp were present amongst them. The weather had picked up and they were starting to cruise the surface giving me a great opportunity to look at the stock. Incredible views of the old dark mirrors, lean looking, as they hadn’t seen countless kilos of anglers bait, living on the rich naturals of this wild oasis. I quickly decided on an area for my first session after prodding the lakebed with the aluminium oars, finding a gravel area amongst the thick silt, chod and weed. I placed a H-Block marker and moored the boat.

I returned late morning with a large bucket of mixed particles, pigeon conditioner and boilies. I was confident in this gloopy cocktail and pretty sure the un-pressured fish would be on it straight away. Using the boat and a large baiting spoon to get the mix out on the spot, I baited an area the size of a mini bus! It was about lunchtime when I returned with the tackle, setting up in what looked like a swim that hadn’t seen an angler for many years. After cutting my way in, the rods were quickly readied and on the spot. Once the bivvy was up nature moved back into the swim, I had a plethora of bugs and wildlife sharing this space with me completely different from the groomed woodchip swims of the circuit water syndicates.

I was expecting instant action, it didn’t happen. The spot was active, flatting off and fizzing occasionally, but the alarms remained silent and the bobbins motionless. Early evening, the weather was still perfect, warm and overcast; it was just a matter of time. 8pm, the right hand rod was off! After a heavy and slow tussle, a large Mirror was at the net cord, and then disaster struck…  Upon seeing the net, the dark old mirror took one last bid for freedom, turning and whacking the net with his tail and consequently folding the net up! The spreader block had ejected the arms and left me net less. Without thinking I jumped into the lake and tried to cradle the fish, which was at my waist by now. The end result was a hook pull and a lost fish. I took a few moments, had a brew and sorted the net out. The rod was back on the spot and order was restored. Fish activity had subsided after all that commotion, the night was uneventful. Fist light saw fish back in the swim, and soon after the right hand rod was away again…

Another tussle ensued, this time without issue and an ancient looking mirror rolled over the net cord, my first fish from this incredible venue. Creamy flanks with a slate grey back, an almost leather with just a line of scales across the dorsal; this was one very classic looking fish.

I went on to spend two years on this lake, managing to obtain tickets for some trusted friends too. Between us we pretty much had photos of the entire lakes stock over that time, none of the fish were huge a low 30 being the largest we encountered, but this place wasn’t about numbers… 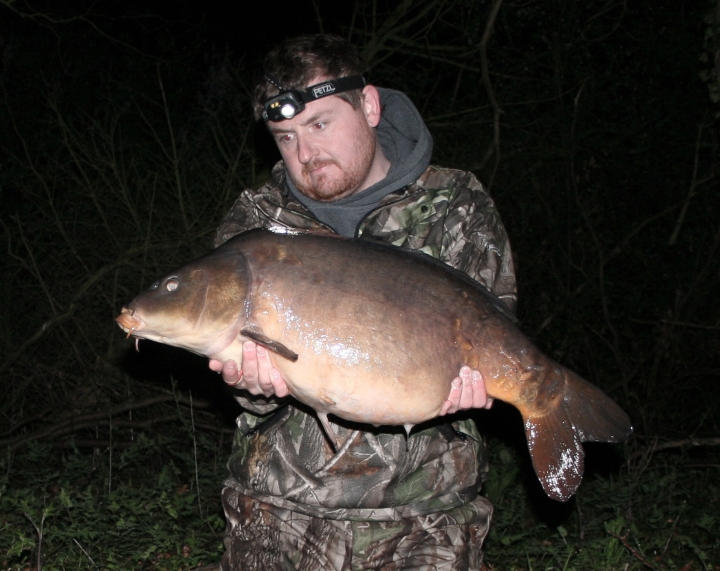 I feel incredibly privileged to have been part of such an untouched lake, seeing a plethora of wildlife and natural beauty on a weekly basis. A true English gem.

It saddened me to learn the lake has fallen foul to our newest foe, the otter. The stock has been decimated and due to the geography, and nature of the lake it will never be fenced. The two years spent here will always be replayed in my thoughts, to find a totally unmolested venue, with old original fish that had not been pressured, was indeed an incredible experience.