First of all thanks very much for agreeing to do this Q and A.

When did you first get into Carp fishing? How big was your first carp?

The monkey is starting to look old how long have you been using the Monkey and why?

Whilst fishing on the Quarry back in 2007 I ran out of teabags. After reeling in I nipped down to the local supermarket to find that a box of PG tips came complete with a free monkey. Never one to turn down a deal I just had to have it. I had been fishing for 24 hours up to this point and hadn’t had so much as a liner so when I got back, I flicked the rods back to their spots before putting the kettle on. I opened the teabags and held the monkey before dropping it on the floor and it rolled down the bank and settling near my rods. Well before the kettle had even boiled my left hand rod was away and I landed a fully scaled mirror of 25lb! During the fight I remember looking down and the monkey was looking straight back! A lucky mascot was born! 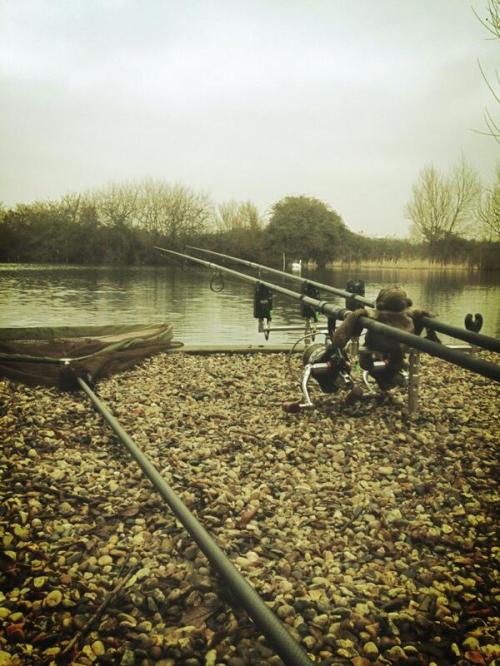 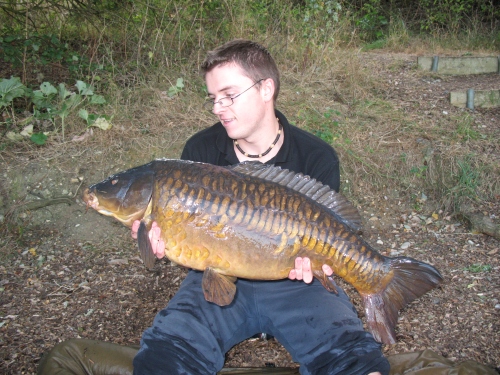 25lb fully that lead to the birth of the Monkey!

We see you catch that stunning 47lb mirror on a day session, Have you got any tips for short session anglers?

As with any length of session the single most important thing is location. You can only catch a carp if they’re in front of you in the first place. Keep your eyes peeled and watch the water as much as you possibly can. If you see nothing to begin with then set up in a swim that offers you a view of as much of the lake as possible, that way should something show itself you can be the first to react. If you can, travel light and as I do for a day simply fish off of the barrow. Have almost everything packed away so that it takes just a few minutes to move.

What is your go to rig when you start fishing a new venue?

I often start with a very short chod rig fished straight on the line. It is mega effective and can be presented in almost any situation.

Our company is called Bite Edge have you got an edge you can share with our readers?

My own fishing time is extremely limited due to work and family commitments. One of my biggest edges is prebaiting. It doesn’t need to be with lots of bait but regularity is key. I might only get one nights fishing every couple of weeks but I would have baited at least 3 times in that period. That way the carp are getting used to having a free meal and when a rig or two is in position their guard is already down. It’s certainly caught me some bonus carp over the years!

What is your favourite bait other than boilies?

Tiger nuts. A devastating bait that no carp can resist. I prepare them in brown sugar and use them when they get to a real gloopy stage. I believe that the natural attractors combined with the crunch factor, makes them almost irresistible to the carp. Hookbaits are usually prepared in Pineapple supreme goo for extra attractiveness too.

With the winter looming is there anything you do different to your end tackle and bait?

Bait wise I tend to stick to Mainline Cell or the new Essential Cell. Both are incredibly easy for the carp to digest so they are still willing to eat it in the coldest of conditions. I don’t use as much in the winter but do still pre bait. I think that if carp are given the reason to keep looking for bait then they will, remove the reason and they will simply go into a torpid state and sulk on the bottom until spring arrives! Rig wise I tend to stay the same. I’m not a believer in fining down as when a rig is laying on the bottom a carp has no way of telling the microscopic differences in hooklength diameter or the difference in hook size. I would have a play with hookbaits and sizes though as this subtle change can instigate a bite when the chips are down.

What is your most memorable capture and why?

A really tough question that has been posed to me before. It’s almost impossible to single one capture out having fished for carp for 16 years but you’ve asked so I’ll try! It will probably have to go to my first 20lber. It came after joining a local club with my best mate Terry, Maldon angling. We joined to fish a lake called Totham pit and it was much bigger than anything we had fished before. We chose a swim on the island and basically spent all day trying every rig and bait combination that we could. I saw 3 fish roll that looked about 300 yards away but in reality were only about 80. I tried as much as I could but I simply didn’t have the tackle to reach that far! I settled for a cast that landed about 10 yards short and after an hour had a drop back. After a brief battle Terry slipped the net under a fish that weighed in at 20.08 and we were both blown away! Happy days indeed

Big thanks to Neil Spooner

First 40lber and first fish that I really targeted

Family time, far more important to me than ANY carp but glad that all 3 children love the great outdoors